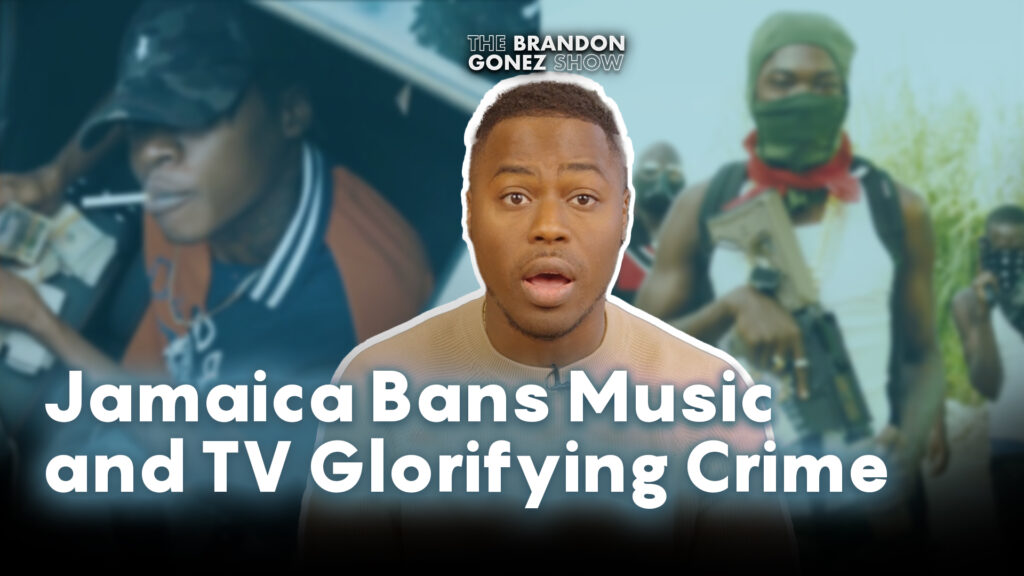 JAMAICA – Jamaica’s Broadcasting Commission has banned music and tv shows that glorify crime. Gun violence, drug use, scamming, and weapons are all prohibited from being included in media produced in Jamaica and on the country’s airwaves. Despite this, artists are pushing back and criticizing the ban. As more people share their thoughts online many people are wondering how this will affect Jamaican pop culture, and if the new rules will actually stick. Let’s dig into it.

The Jamaican government said the ban is meant to cut back on media that “could give the wrong impression that criminality is an accepted feature of Jamaican culture and society.”

Additionally, the Broadcasting Commission of Jamaica said that having this type of content included in music and videos broadcasted publically “normalizes criminality among vulnerable and impressionable youth.”

Worldwide, popular music in many genres features content that could be considered to glorify crime. While Jamaican artists like Bob Marley have preached peace and “One Love” in their songs, music in Jamaica has historically been scrutinized for its content. For instance, the popular 2001 Buju Banton song Boom Bye Bye describes the murder of a gay man.

While the song “Warn Them” by Mavado includes mention of murdering a newborn baby, and the following:

So what is officially being banned? Officials say “urban slang” that has anything to do with drugs, acquiring money illegally, wire transfers, acquiring wealth, or a lavish lifestyle are out. The ban cited specific words and phrases including “Molly” “jungle justice”, “bank/foreign account”, “food”, “wallet”, “purse”, “burner phone” and “client”. Even sampling a song with any illegal activity is strictly banned.

This isn’t the first time the island’s government has pushed for restrictions on media content. In 2009, the Jamaican Broadcasting Commission tried banning music featuring explicit sex and violence from the country’s airwaves.

At the time, they were looking to ban the broadcast of any material that promoted the act of “daggering,” the use of weapons, murder, sex, rape, mob violence, and arson. The responsibility fell on licensed broadcast operators who were expected to prevent the transmission of any such material, but the government did not actually outline or enforced any consequences for breaking these rules.

That same year and in the years to come, songs like Vybez Kartel’s Romping Shop, featuring lyrics that depicted many things that had been banned, including graphic descriptions of sex and genitalia, succeeded on Jamaican airwaves.

Fast forward to 2022 and the Jamaican government appears to be putting its foot down again. But yet again, there is no actual punishment outlined.

The ban has ignited massive debates throughout the country and across the internet about things like freedom of speech and self-expression. Many Jamaican artists have expressed the opinion that music is meant to imitate real-life experiences, and the experiences of many Jamaican people include poverty and doing whatever it takes to survive.

As the ban went into effect, Jamaican artists continued to push out music and content that included the newly banned subject matter. This includes the official music video for Skeng and Tommy Lee Sparta’s Protocol Pt. 2. Within 18 seconds of the video you witness men loading and firing guns in the air. The music video goes on to show men smoking weed, waving guns around, and shooting rounds into the air.

This content is pushed out across digital platforms like YouTube, Spotify or Apple Music. While all of these platforms are popular among youth, they are also difficult for the government to control.

Young people online are also speaking out, saying violence in Jamaica isn’t fuelled by music. But rather by poverty.

“While I agree music glorifying violence etc. won’t solve many of the issues with Jamaica, cutting down the exposure of it can help in minimizing the effects it has on the younger generation who hero-worships these entertainers. The Jamaican music scene sustained us for decades without being raw and ridiculous. Some of these new dance hall entertainers make their bread and butter by selling and pushing drugs and violence. That is their niche,” commented one person on Instagram.

“It’s one thing to sing about the world around you and what elements you are exposed to but amplifying and glorifying both as a way of life should not be allowed. You can convey truth to the masses in a respectful and insightful way and still entertain,” she continued, adding that the Jamaican government needs to fixate efforts on supporting the people, providing better services like health care, outreach programs, farming support, and better infrastructure to improve the island’s image.

While others wonder how, and if, the government plans to enforce the most recent restrictions.

“Most Jamaican Politicians aren’t serious about the development of Jamaica for all. I fear that if their style of representation continues, our country’s future will be marked by increased violence and inequality,” commented one person.

And some feel that not only is Jamaica making the right move, but other countries should follow suit!

“Good, it’s needed in the US and Canada now with in regards to hip hop. It’s no coincidence hip hop and gun violence/drugs goes hand and hand. Removing it will eventually change the narrative of the Black community. Too many youth look up to this culture as the envy of success,” said one person in response to news of the ban.

So if Jamaican artists are going to continue making the content, and young people are going to find ways to consume it, does the Jamaican Broadcasting Commission’s ban even address the real issues plaguing the country? Will banning music about gun violence stop poverty and violence in the real streets? That’s what we’re asking this week on News You Can Use.

Read More »
PrevPreviousIs it Time for Montreal to Get an NBA Team?
Next1.5 Million Cans of Dry Shampoo Recalled in Canada Due to Cancer RiskNext
On Key