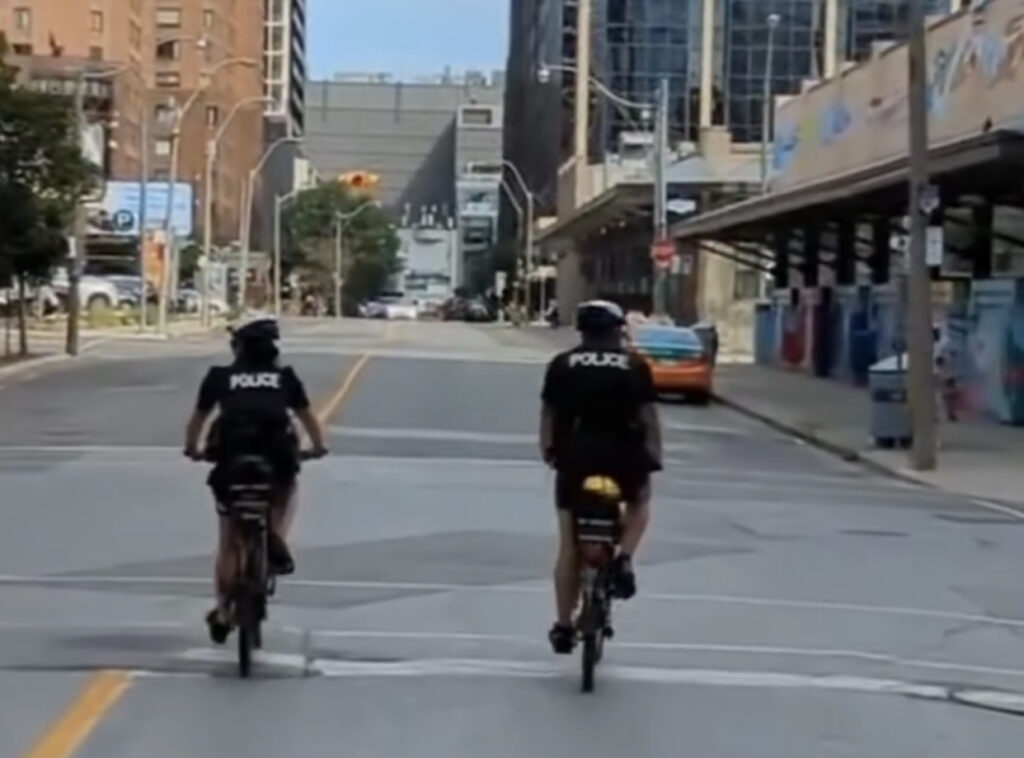 TORONTO – Cyclists are often criticized for not following driving laws, especially in Toronto. While everyone in this busy city wants a slice of the road, Toronto roads are packed with people trying to get around and police officers enforcing the rules of the road. But something we don’t expect to see is Toronto police officers on bicycles actively violating those rules as some newly surfaced Instagram videos show them doing.

The Biking Lawyer has shared several videos on with The Brandon Gonez Show on Instagram, showing police officers on bicycles in Toronto breaking various traffic laws, including rolling through stop signs, turning without signaling, and riding on the sidewalk.

“We have footage of @torontopolice constables safely biking through stop signs today. These officers should NOT be ticketed but held up as an example of the efficiency and low risk to public safety of the Idaho Stop. @cycletoronto and other advocates have pointed out (with stats and research) that the #IdahoStop is actually safer than coming to a complete stop at each stop sign and reduces congestion.

@trafficservicestoronto is quite vocal on road safety on IG, what are your thoughts?

We of course do wish these officers had used hand signals to alert which way they were turning, but hey, no one’s perfect,” reads the caption of a post from The Biking Lawyer on Instagram.

“I was Literally stopped by these exact same officers earlier today, in the same area for rolling through a stop sign on esplanade.. they asked me if I wanted a ticket, I said for what and rolled away LOL,” one Instagram user wrote in the comments.

“Literally saw a cop do this at the stoplight crossing at Shaw/harbord today while I was heading down harbord… A block south of where they were blitzing cyclists last week. Their own private Idaho I guess!” wrote another.

This comes after videos circulated online earlier this summer showing Toronto police officers ticketing cyclists for breaking the speed limit on the bikes in High Park. Some were outraged at the tickets cyclists received, while others felt that officers were justified in penalizing cyclists as they would drivers. Either way, recent videos of officers violating the rules themselves have sparked some controversy.

2. TPS and the City of Toronto review the merits of the Idaho Stop/safe cycling yield.

3. Divert funding used to conduct cyclist related TPS enforcement blitzes to Cycle Toronto for the creation and dissemination of safe cycling videos, including but not limited to how people on bikes can and should safely perform a safe yield or Idaho Stop.

4. Use TPS’ popular Traffic Services social media accounts to promote these safe cycling videos to all road users in a public education campaign.

The Brandon Gonez Show reached out to Toronto Police Services for comment on these videos and allegations. They did not respond in time for publication.

Read More »
PrevPreviousHere are Some Tips to Help Build Your Credit Score!
NextWas Rolling Loud Toronto a Success or a Flop? Here’s the Breakdown!Next
On Key