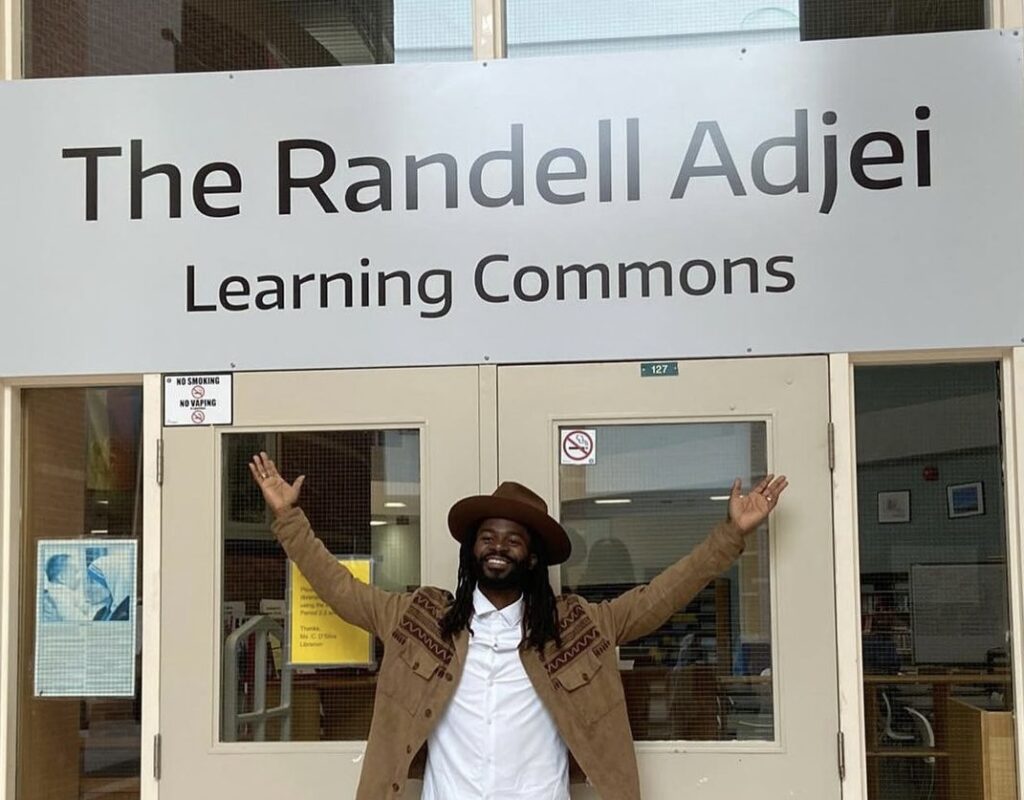 SCARBOROUGH – Ontario’s first Poet Laureate Randell Adjei is being recognized by St. Mother Teresa Catholic Academy, the high school he attended, with a library named in his honour. The Randell Adjei Learning Commons was recently renovated for students attending the school, and the new name was unveiled earlier this week.

“I am still in awe. But extremely grateful for this opportunity. I am not even sharing this to show it. I hope when you see this you know that anything is possible. That your dreams are closer than you think. May this prove to you that you can turn rocky moments into golden opportunities. That no matter what you’re going through, better is on the other side of transformation,” Randell wrote in an Instagram post.

The poet has joined us on the show for various conversations about his work and art, including for a special Hennessy Conversation earlier this year, and is a friend of The Brandon Gonez Show. He shared how truly special this experience has been for him in an interview.

Adjei says that back in June he received a call from the school’s principal, Jose Alberto Flores. Flores was planning to retire and had a few things he wanted to do before the end of his career, including honouring Adjei.

Adjei Shares What this Means to Him

“There are so many emotions. That school really changed me. MT has a really bad rap, it’s always had a bad rap because it’s in Malverne, so just to shed a positive light on it meant so much,” Adjei shared, adding that a younger Randell would be so proud.

He struggles to describe how he felt when he first saw the library.

“I think my jaw dropped. I saw the photo before I came, but my jaw dropped and I just said wow. The sign is big, like it’s really big, I didn’t know what to say,” Adjei told The Brandon Gonez Show.

“I feel excited because there are a lot of young people who look up to me and to have them see that this is possible? It’s amazing, I feel very grateful,” Randell said in an interview.

Adjei has a history of working with the kids at Mother Teresa. He has previously worked as a mentor with students, running workshops, speeches, camps and more. He says he now has big plans for engaging with students in the school using literacy. Randell explained that he feels he has to introduce himself to the students so they understand who the man the school named their library after really is.

But for full transparency, Adjei says that he wasn’t always well loved as a student.

“I wasn’t always a great student, I have to be honest,” he shared, adding that many teachers and school officials looked down on him.

Randell says that when he was a student his principal told him that he was the worst student she had ever had in her 31 years of teaching.

“What I hope is people recognize that there are so many kids like me. I hope another kid sees me and sees that he can be like me,” Randell shared.

“Wow, this is so legendary!!! I’m so happy for you @randelladjei You DESERVE!!!!! Witnessing you get flowers while you’re still with us is everything ,” wrote Lu Kala.

“ABSOLUTELY AMAZING!!!! YOU ARE A WALKING INSPIRATION! SOO SOO MIRACULOUS AND DESERVING!! AHHHHHJ THIS IS HUGE FAM! HUGE” wrote another person under Adjei’s Instagram post announcing the library’s new name.

“Let’s goooo! We love to see it. Legacy is what we are here for and Legacy is what you’re creating. Everyday! Proud of you,” commented a third person.

What is a Poet Laureate?

Young, talented and ambitious, Randell Adjei is the first person to ever receive the honour of becoming Ontario’s Poet Laureate. The title of Ontario Poet Laureate was created in honour of Canadian musician, Gord Downie. Downie passed away in November 2017 after being diagnosed with brain cancer. He was 53-years-old. The position not only serves to continue Downie’s legacy but to honour his work as a singer and a poet.

Read More »
PrevPreviousVideo of Justin Trudeau Singing Bohemian Rhapsody While in London for Queen’s Funeral Causes Uproar
NextJustice for Mahsa Amini: Here’s Everything You Need to Know!Next
On Key